Spring has sprung, but everybody’s lives are being directly affected by the fallout from what is happening in Eastern Europe. It seems incredible to believe that Russia invaded the sovereign territory of Ukraine just one month ago. Since then, the courage and resilience of the Ukrainian people, inspired by conspicuous leadership, has astonished an onlooking world. 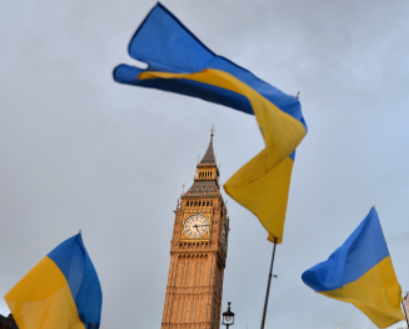 I make no apology for mentioning this first as it these events that form the backdrop of how we in the UK, the Government, the Chancellor and even us here in Somerset are having to readjust to the reality of our personal finances. Even so, many are being proactive in their support for those fleeing the devastation of their homeland as well as for those brave souls who have stayed to defend freedom and democracy against oppression and tyranny.

From our capital city and its centre of power to the tranquilly of a Somerset church, the Ukrainian national colours proudly display powerful symbols of empathy. We salute them on their journey of resistance.

Locally, we have a big task on our hands. There are now just 40 days to go until polling day here in Somerset. And we need your help to keep control of the Council.

David Fothergill, the Conservative Leader of Somerset County Council, has made it abundantly clear that the result of the elections on 5th May is critical for our area, simply because the winning Party will run our County for the next five years.

This means the rate of Council Tax and the quality of local services for the next half a decade are at stake. As Conservatives, David Fothergill, if re-elected as Council Leader, has stated that his focus will be on delivering high-quality services whilst keeping Council Tax down.

However, be aware that the Lib Dems are throwing everything they've got at their campaign to win. We therefore need to do the same, and more. The last time the Lib Dems ran the Council, they racked up £324m in debt for Somerset residents. We simply cannot afford to let them do the same again.

In Somerton & Frome, we’ve selected a brilliant team of candidates to represent us on the new Unitary Council, and they are working their socks off to stimulate the electorate to get out and vote for them, either with a postal vote or on polling day.

We’ve already had a number of Action Days, and more are planned over the final few weeks. Please do come and support your candidates. 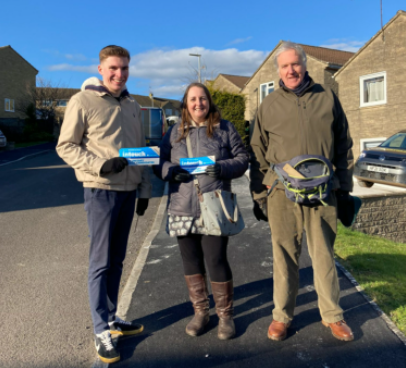 Environment Minister Rebecca Pow MP praised volunteer litter-pickers across the South West for their “tremendous work” to protect the environment. The Minister commented, “I was delighted to support the Big Clean, and congratulate all of those who took part to help protect our environment. This will build on the work that we are doing to tackle litter and problematic plastics.”

19th March – Cllr Mike Lewis and Unitary candidate were out an about delivering leaflets in and around Castle Cary.

You should, by now, have received the AGM Minutes. My thanks to all those who came along to Edgar Hall in Somerton on 11th March and, indeed, to all those who took the trouble to register their apologies. Because of Covid, it was the first time for two years that we had had the chance to have a live meeting. It was therefore not surprising that there was an air of welcome expectation as we move forward into a post-pandemic era with its associated opportunities for fundraising socials.

The atmosphere was clearly upbeat, as reflected by one new member who kindly sent me the following message: “Thank you for welcoming me to the fold tonight. Meeting everyone was lovely, what a super bunch of people! AGMs aren’t traditionally entertaining but tonight was - in the best possible way I should add! I’m very excited about getting involved in whatever manner that may prove to be.”  It’s very gratifying to have created such a positive attitude.

A reminder that the next Luncheon will be held on Wednesday 27th April with guest speaker Richard Kay, of Lawrences Auctioneers, who will talk about ‘Fake or Forgeries’ (preceded by a short Annual General Meeting).

Guests are welcome, including gentlemen. Full details of this event and the Club’s future programme obtained by contacting Mrs Pat Middleton (Club Chairman) on 01935 823682 or by email at patricia_middleton@yahoo.co.uk

The winning numbers for February and March were drawn by Andrew Harvie-Clark at our AGM on 11th March. The numbers and winners were:

February: No 203 – Mrs B Orfeur of Pitney, near Langport

Each winner has been sent a cheque for £100.

If you are willing to have a Conservative stakeboard poster in front of your house, please contact Paul Dean on 07831 512874 or by email: paularthurdean@gmail.com

And Finally, 2 … Beware of Deceptive Claims

The latest Lib Dem campaign flyer claims “More and more people are backing the Lib Dem team to put the heart back into Somerset”. Really? If true, investing millions of your taxes in heart surgeons will probably be the most vital local service! Just remind yourself of the debt they racked up the last time they ran the Council.