The media reports about David Warburton that began to emerge last Saturday and were then splashed across the Sunday newspapers came as a shock to us all.   Although speculation is rife about the serious allegations that have been made about our MP, we must be very careful not to comment on matters about which we have no knowledge whatsoever.

Our thoughts should be for David and his family as they try to come to terms with what has happened.    I have passed on all the heartfelt messages of support to both David and Harriet from the many of you who have contacted me; these have meant a lot to both of them as they confront this unexpected and unwanted turn of events.

Personally, I do not recognise the alleged conduct of our MP.   For an impartial view from a responsible media outlet, the editor of the Leveller®, Andrew Lee, confirms this opinion in his dispassionate and objective article which was published on Monday.   Please contact me if you wish to read this article.   Leveller Confidential is an online news feed for the Leveller® Newspaper, covering news across Somerset.

Immediate action was initiated to provide advice to our councillor candidates across Somerton & Frome on how to handle the fallout from these media stories with the general public.   The same advice has been provided for my fellow Somerset Area Chairmen in the light of election campaigning in the wider community across the county.

This advice is as follows:

“Although I’m well aware that you will use your own common sense when talking with the electorate on the doorstep, I thought you might like to have a form of words to help you through the inevitable questions you may be asked about what they’ve read and seen about David Warburton.

If needed, the line to take, as agreed by your SFCA Officers, the Leader of Somerset County Council and our CCHQ Area Campaign Manager, is:

“We acknowledge the serious nature of the allegations made about David Warburton … but … We are campaigning on local issues for a Conservative-led council to run local services.”

If pressed for more information, simply say: “We know nothing more than what’s already been published in the press, or seen or heard on news bulletins”.

Our default line to any external enquiry must be “No Comment”.

David Warburton’s staff will therefore continue to respond to correspondence sent to him by any of his constituents, whatever their political persuasion.

I am available to answer any specific questions you may have, and I have lines to David Warburton’s staff members as well as to the CCHQ Press Office, if required.”

The Conservative Manifesto for the Somerset Unitary Elections on 5th May was launched in Taunton last Thursday, 31st March, by the Party Chairman, The Rt Hon Oliver Dowden CBE MP.   The turnout was impressive.

The Manifesto reported on what had been achieved in the last five years and the set out a clear Conservative plan for Somerset’s future: 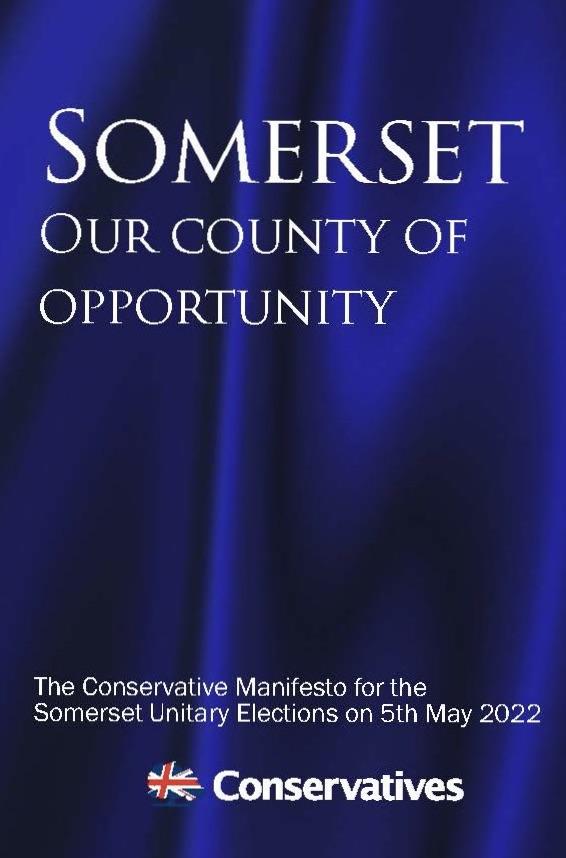 1. Looking after your money

3. A planning system that works for all

6. Supporting you and your family

In Somerton & Frome, we’ve selected a brilliant team of candidates to represent us on the new Unitary Council, some of whom attended the Manifesto launch. 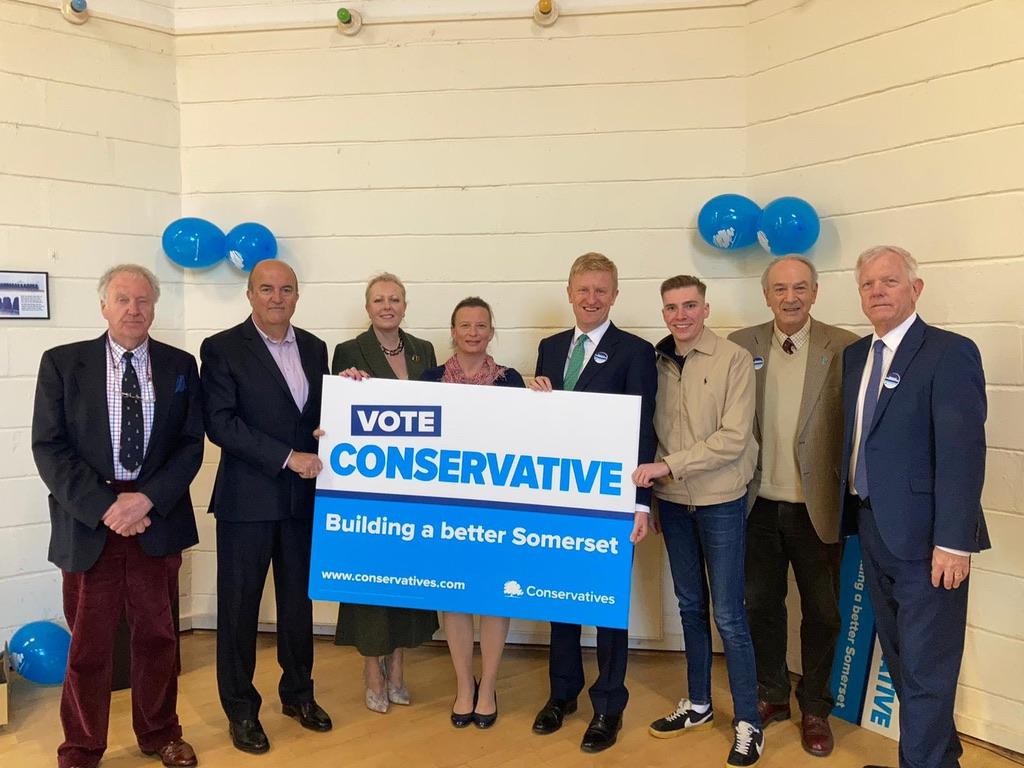 Watch out for messages giving details of times and locations of forthcoming Action Days which are currently planned for:

A reminder that the final Luncheon in the current programme will be held at The Shrubbery in Ilminster at 12.00 noon on Wednesday 27th April with guest speaker Richard Kay, of Lawrences Auctioneers, who will talk about ‘Fake or Forgeries’ (preceded by a short Annual General Meeting).

Guests are welcome, including gentlemen.   Full details of this event and the Club’s future programme can be obtained by contacting Mrs Pat Middleton (Club Chairman) on 01935 823682 or by email at patricia_middleton@yahoo.co.uk

The winning number for April will be drawn on Friday 22nd April at the end of a meeting of the Association’s Executive Council.

Don’t forget that there’s a Grand Summer Prize of £1,000 to be won.   That will be drawn at our Summer Pimm’s and Punch Fundraising Party to be held in June…

At last, we are planning a party.   Hopefully, we’ll have something to celebrate!   This will be held on Friday 10th June from 6.00pm to 9.00pm at a country house in an impressive setting at the end of on one-mile long drive.   Full details will be announced shortly.   In the meantime, please make a note of the date, and here is a view of the entrance gate to the house – a hidden gem in the constituency. 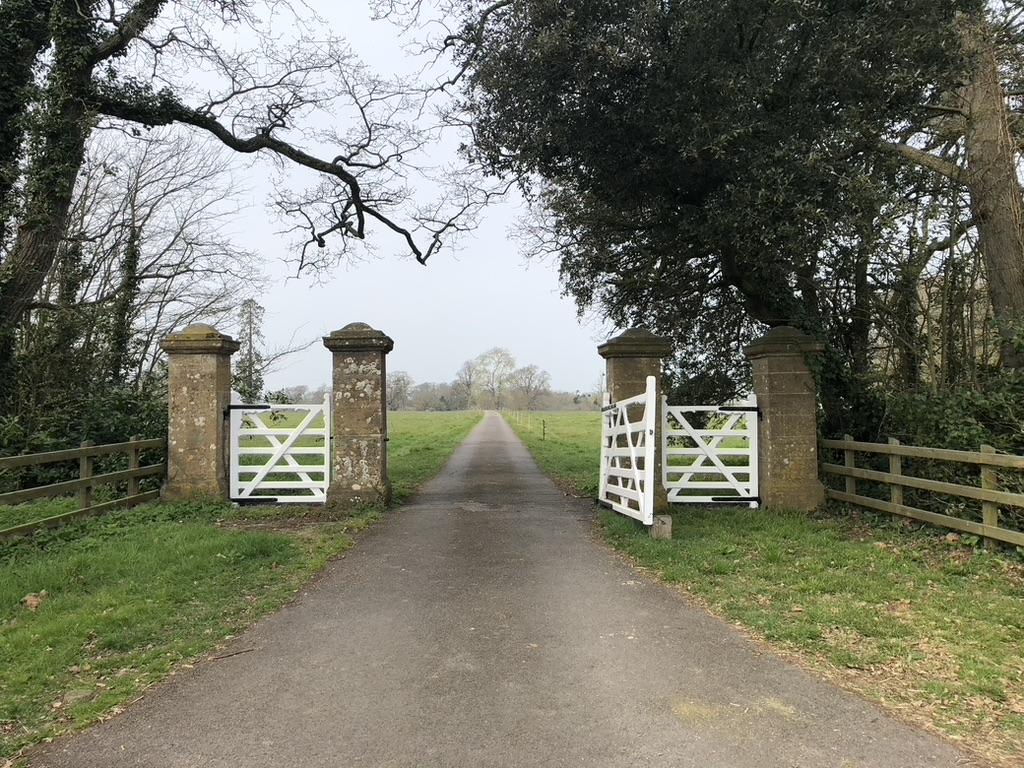 Good luck to all our candidates – only four weeks to Polling Day.